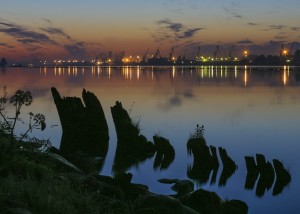 Its project, From science to society: Research and restoration of the Daugava river estuary biotope capacity, assesses the green and blue areas of the Daugava estuary which occupy a third of the port area.

These areas are assessed from the point of view of sustainability of biological resources and conservation of protected species and biotopes.

“During the project implementation, some interest groups gradually started to get involved with project activities. The first and most surprising was the proposal of local residents, living near the site Kremeri, to collect all cut reeds and use them for domestic purposes,” explained the FRA.

It continued: “At least ten households were involved in this process and in this way, the project popularised environmentally friendly management of biosocial waste.”

With 20 % of Latvia’s inland territory is covered by wetlands, the areas have heritage value, where human activities, estuarine nature beauty, natural processes and ecosystem services coexist in harmony.

Due to high biological capacity, huge areas of the Daugava river estuary where defined as nature protected areas, some of them are situated within the Freeport of Riga area.

However, due to sedimentation and hydrogeological processes, the biological capacity of certain wetland biotopes had decreased and they could not serve as breeding and feeding grounds for birds and water species anymore.

“We worked for the project in view of understanding the needs of different groups of society within and around the port and communities of birds and fishes, whose lifestyle is closely connected with and at the same time independent from the port activities,” explained the FRA.

It continued: “All the project team as a whole and everybody as an individual involved in the projects implementation had understood the goal of the project.”

“Moreover, they have given their effort to the project, shared their personal knowledge devoting it to the societies’ needs, creating the benefit and reaching the best possible results.”

The Freeport of Riga Authority’s project has been nominated for the ESPO Award 2016, the winner will be announced during the official Award Ceremony at the Egmont Palace in Brussels on 9 November.

Via On the MoS Way