A focus on lower fuel costs 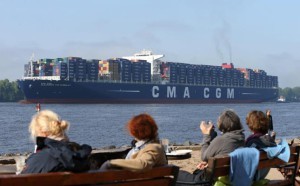 LOWER oil prices are sharply reducing the cost of shipping merchandise from Asia to the United States and Europe as the cost of bunker fuel tumbles. Container shipping companies deal with the volatility in fuel prices by adding a separate bunker adjustment factor or fuel surcharge to their freight rates. Fuel can account for more than 60 percent of the total operating costs of moving freight across the oceans so the surcharges are one of the most important elements of total transportation costs. Surcharges are recalculated quarterly based on the average cost of fuel over a previous 13-week period. So the charge for April-June 2015 is based on fuel costs between December 2014 and February 2015. Other adjustments are made periodically to reflect changes in average fuel consumption, sailing time, vessel capacity and fuel quality changes. In September 2008, shortly after oil prices had peaked, shipping lines were adding a surcharge of almost$1,500 to the cost of shipping every 40-foot container between Asia and the West Coast of the United States. By the second quarter of 2014, lower oil prices and slow steaming, which helped offset the impact of stricter sulfur standards, had cut charges on the eastbound transpacific route to $527 per 40-foot container. The collapse in oil prices has since cut surcharges by a further 27 percent. From April 1, major shipping lines will add a surcharge of just $385 per 40-foot container on eastbound transpacific routes from Asia to the United States.

Read here the full aricle: On The Mos Way